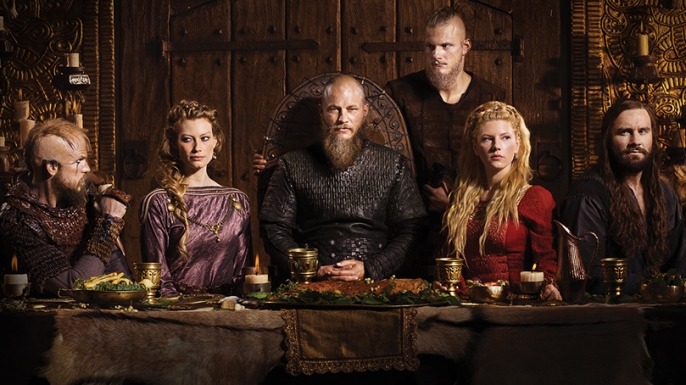 Vikings has been my favorite show on television since season 1 first aired in 2013. The show was written by Michael Hirst, and loosely based off of the Icelandic legendary saga,  Tale of Ragnar Lodbrok.

The show is well written, and the characters are well defined. I am still broken hearted by the loss of Siggy at the end of Episode 4, Season 3. She was an endearing character, brought to life by Jessalyn Gilsig. For a writer, this show is tip filled on how to build a believable character!
There have been deaths of other favorite characters, and I almost compared Hirst to George R.R. Martin a time or two, who is notorious for killing off well loved characters.

There are a lot of historical inaccuracies in this show, but since we technically do not know a lot about the Danes, I can forgive it. It is based off of a legend after all.

Some of the key characters really did exist, like Rollo, but historically he was not Ragnar’s brother. Rollo was really the Duke of Normandy, and he was actually the distant grandfather of William the Conqueror. Today’s British Monarch can trace their lineage back to Rollo.

The timeline of battles also has inaccuracies, but all in all it makes for a good show. Season 1, sack of the monastery is probably based off the Sack of Lindisfarne, which happened in 793 CE, leading into Season 3’s Siege of Paris, which historically occurred 911 CE.

Season 1 told us wrongly that the Norse did not know about the lands to the West, such as England. We know that trade had been established long before the Romans invaded Gaul in 1 BCE.

Other disputes about inaccuracies are the clothing worn, and the use of a blade as a primary weapon in combat. Some historians believe that the Norse used their shields as a primary, and a bladed weapon as a secondary back up.

If you can get around the historical inaccuracies and just enjoy the Vikings for what it is, it’s brilliant. It’s a fun show to watch, and I never miss an episode. There will be a Season 5; the show was renewed March 17, 2016, for another 20 episodes!

Interested in reading the Saga of Ragnar?  Here is a link to a pdf translated into English for you to enjoy!

Vikings currently airs on Thursdays 10/9c on the History Channel.