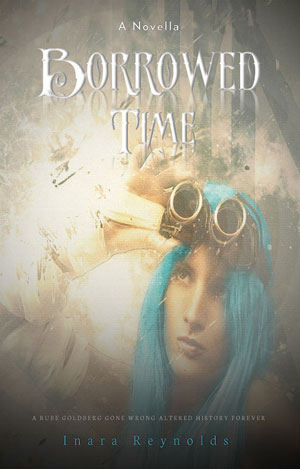 Stuck in a prim and proper Victorian world, where status and appearances matter, nineteen year old Meryia Abigail Wells-Morgan dreams of having a life outside of the typical Victorian stereo type in New England, and getting out from under her over bearing mother.

As a steampunk and creator, she dreams of patents, Rube Goldberg devices, and fame as a woman in a society dominated by men.
Loaded with a component borrowed from her mother, her current Rube Goldberg goes array, sending her back in time. Was it fate, or was it just a mistake?

She finds herself in a race against time and an approaching army to save not only herself, but the people who have taken her in and the man she has fallen in love with.
Can she succeed? Or will she doom them all to a fate worse than death?

Borrowed Time was written for the Sci-Fi September #justwriteit #AdventureEdition Something borrowed adventure challenge on Wattpad.

This story has an air of romance, and contains history and alternate history as well.

Currently posting as a serial story to conclude by Sept 30, 2016.  The finished Novella contains 18,992 words, 11 chapters and an Epilogue.